Here are the accounts from Agnes Houston and Chris Norris, people living with dementia who helped to develop the guide.

Chris Norris is Chair of East Kent Forget Me Nots and Dementia Service User Envoy. Chris told us about his experience of living with dementia and of services he received. Chris said that dementia was not seen as something younger people get so it can be harder for younger people with dementia to get a diagnosis. Chris was fortunate as an enlightened GP helped. Psychologists saw beyond tests and diagnosed Frontal Temporal Dementia (FTD) Young onset and he came to realise he was still the same person the day after the diagnosis as he was the day before. Chris believes that he “has Dementia but Dementia doesn’t have me!” Chris has taken part in a lot of activities since his diagnosis, but it has affected his ability to carry out various things. Chris now struggles with putting things in the right order, with sequencing and words get mixed. As someone who was always very organised Chris finds this very frustrating, but is finding ways to deal with it. Unlike Alzheimer’s, there is no pill to slow FTD down.

Chris said it is really important to focus on what people can do. People need to see a future after diagnosis and should be signposted to what is available. People with dementia need to get out and about and keeping active is really important. Chris spoke about the Forget Me Nots and how they support activities. They have been working with University of Kent psychology students. Not only do they organise a range of activities, they also participate in consultations about policy, training and service development. Chris said that people who are living with dementia do have a voice. We must not kick people with dementia into the long grass and forget about them, their experiences and voices can help create a better understanding around dementia 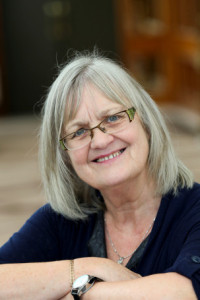 Agnes spoke about her experience of diagnosis. She has early onset dementia and she was lucky that her GP pushed her to get tested and diagnosed early, and Agnes is very pleased that she did. This happened 10 years ago in what Agnes described as ‘the dark age of dementia’. She said people being diagnosed now don’t know what it was like before the dementia strategy was in place. Now there are link workers, dementia information and cafes and it’s easy to take these provisions for granted. When Agnes was diagnosed there was very little available to support people with dementia.

Agnes and Members of the Scottish Dementia Working Group (SDWG) pushed for change, gatecrashing meetings and discussions that they were not included in because they had dementia. Now they have peer support from virtual friends round the world. Dementia is now global. Dementia Alliance International brings together people with dementia from across the world that sets to represent, support and educate people living with dementia .  The Dementia Engagement and Empowerment Project is a UK based network of groups of people with dementia in the UK who want to try to change services and policies that affect the lives of people with dementia.  Agnes explained that new technology like I pads and Zoom help people with dementia to participate, get their voices heard and speak about what life is like if you have dementia. They all help them make a difference to the things that matter to them. 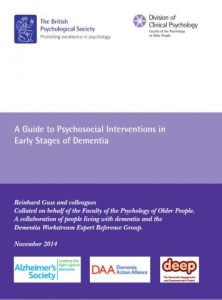 Knowledge is power in dementia and these changes make people powerful said Agnes. The British Psychological Society  publications contain a wealth of knowledge for people living with dementia. They challenge the widely-held belief that there is nothing you can do for dementia, a belief that can prevent people getting a diagnosis – why bother if there is nothing that can be done? The publications from the BPS Faculty for the Psychology of Older People explains how and why you should diagnose dementia and diagnose early.

Agnes found working with The British Psychological Society a very positive experience of working with professionals. It was a positive collaboration, with mutual respect and learning from one another. This is a good model for other professional bodies to use. In their joint work, people with dementias’ views were incorporated from the start and right to the end as the Society had the courtesy to invite Chris and Agnes to events to launch the guidance.  Agnes thought the documents provide an  ideal resources for link workers, activity coordinators, day centres and people looking for ideas.

If people with dementia are not listened to and their needs not met, they will ‘get together and do it ourselves’ said Agnes, and that’s what’s happened. This now a global phenomena and things are changing. For example, Agnes has written a booklet on the sensory impact of dementia, with help from Life Changes Trust. This is now translated into many other languages.

Agnes finished by saying that it is hard living with dementia, that there is another side to her life which she shared with her close friends. But what helps her is giving options and help; informed choices and working together collaboratively. 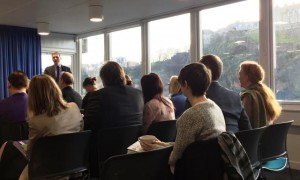 The event was Chaired by Professor Jamie Hacker-Hughes, President of the British Psychological Society. The British Psychology Society is developing guidance on aspects of working with people with dementia and plans to develop more work in Scotland. If you are interested, please get in touch!