This month is Luminate’s Festival of Creative Ageing. We’re celebrating in East Lothian with a number of events for people across the county – check the events calendar for delights in Musselburgh, North Berwick and Haddington. Not all are open to the public, but please get in touch if you’re interested.

Last week residents from Fidra House in North Berwick enjoyed an afternoon out at North Berwick’s Community Centre. We had the hall for the afternoon and made the most of it!  There was  display of artworks by Hugh McCready which were stunning – there’s a few on display here and more on the Dementia Friendly East Lothian. Facebook Page.  The Fidra House Choir – Young at Heart –  sang a selection of their favourite songs led by Mary. We did pretty well and even did some harmonies! There’s something special about singing together that’s good for the soul. 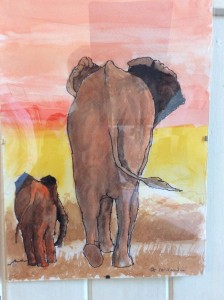 We then had a chat over tea and biscuits. The Community Centre was the old North Berwick High School and there’s something about the architecture and the light coming through those windows that brought the memories flooding back. One of the group had been a pupil here and that started off a chat about school days. There was a qualifying class upstairs that the pupils had to pass or they got held back. There was lots of talk about how folk had been scared of some of their teachers, too frightened to learn. We all hoped things never got that bad again, you can get more out of children and people in general if you’re kind to them. Some thought things and gone too far the other way though and children needed more discipline.

Of course everyone had been well-behaved when they were younger, but one or two had had the strap!

Clean shoes were a big thing and teachers used to inspect them. Dirty shoes meant 100 lines. One boy had told the teacher it wasn’t his fault, it was his Mum who cleaned his shoes and he promptly got 200 lines! Bet he didn’t do that again!

Oh and a word of warning – do not get your hair cut by May! Especially if she’s trying out her new hair trimming machine ….. Hair raising tales indeed! 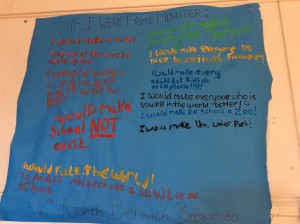 We talked about the Brownies’ wish list on the wall about what they would do if they were Prime Minister and we added our own:

It was a lovely afternoon enjoying good company and good music in a setting that brought back many memories. 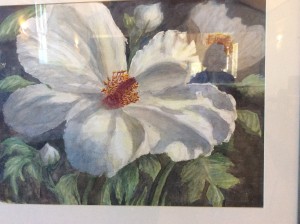 Next event is in the Hope Rooms North Berwick on 21 October and then 31 is Open House for everyone to get together and try out new things at the Community Centre. Watch website and out Facebook page for details!

This site uses Akismet to reduce spam. Learn how your comment data is processed.